Militants seized the Mocímboa da Praia site, which is near gas projects worth £45bn, last week

Government troops are taking up positions outside a port in the far north of Mozambique which was captured by Islamist extremists last week in the latest escalation of the insurgency in the southern African country.

Hundreds of reinforcements have been rushed into position around the port in the town of Mocímboa da Praia.

The facility, which is close to the site of natural gas projects worth about $60bn (£45bn), fell on Tuesday when marines who had resisted several hundred militants ran out of ammunition and were forced to withdraw.

The Mozambican defence minister, Jaime Neto, said last week that the extremists had infiltrated parts of Mocímboa da Praia and then “attacked the town from the inside out, causing destruction, looting and the murder of defenceless citizens”, according to a report from the local Zitamar news agency.

The attack was the latest in a series launched on the town by a group known as Ahlu Sunnah Wa-Jamaa, which pledged allegiance to Islamic State last year. The extremist operation took place over several days, with early attacks closing off roads leading to the town by eliminating government defensive posts, before a final assault.

“This involved the largest concentration of insurgents we have ever seen, was sophisticated and was clearly planned for some time. It’s a success and an embarrassment for the government, but they are extremely vulnerable at the moment,” said Jasmine Opperman, a South African analyst who has followed the intensifying conflict in northern Mozambique. 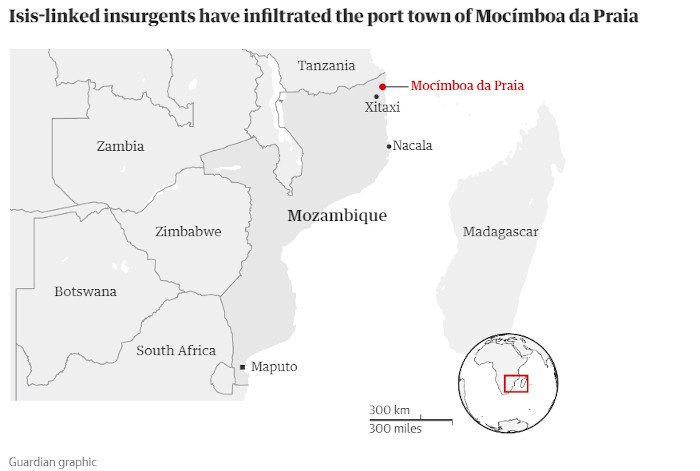 The government has suffered a series of setbacks in its efforts to roll back the extremists’ advance.

An Ahlu Sunnah Wa-Jamaa force briefly occupied the centre of Mocímboa da Praia in March, burning government facilities including a barracks and brandishing banners of affiliation to Isis.

The militants raided a second town and badly damaged the district police headquarters. They too carried an Isis flag.

Other raids have met with limited resistance. As many as 55 government soldiers, mainly recent recruits being transported in open trucks, died in a well-prepared ambush last week on an approach road to Mocímboa da Praia as authorities sought to reinforce the garrison in the town.

Local security forces suffer from poor training, minimal equipment and low morale. Recent attempts to reinforce them with expensive foreign mercenaries do not appear to have been effective.

At least 150 Russians linked to the Wagner Group, a company that has supplied mercenaries to fight in several African countries, were deployed last year but were forced to withdraw after suffering significant casualties.

Dyck Advisory Group, a South Africa-based private security firm currently employed in the north of Mozambique, has also struggled to make any significant impact. Its handful of light helicopters were based too far from Mocímboa da Praia to intervene effectively.

The insurgency in the remote north of Mozambique emerged in 2017, and is rapidly developing into one of the region’s most serious security challenges.

Observers increasingly compare the situation with the early phases of insurgencies in Nigeria, Mali and elsewhere in Africa. These have grown in strength over the last decade, with repeated efforts by local, regional and international powers to stem their spread achieving limited success at best.

The conflict in Mozambique is rooted in widespread anger at the failure of central government to fairly distribute earnings from the exploitation of the region’s rich natural resources, as well as a range of historic grievances. Discontent has been heightened by endemic corruption, expulsions to clear land for international firms to invest in the gas project and an indiscriminate military response to the violence. Muslims comprise around 18% of the overwhelmingly Christian country.

The insurgents have so far killed at least 900 civilians, as well as several hundred government soldiers and police. The true death toll, however, is extremely difficult to establish, observers say.

“The bottom line is we simply don’t know how may have died. There are reports that bones are being dug up in fields when farmers return to villagers once the government forces have established some semblance of security and insurgents have withdrawn,” said Piers Pigou, a regional expert with the International Crisis Group.

The bloodiest attack took place in April, when more than 50 people were massacred in Xitaxi in the Muidumbe district after locals refused to be recruited to the ranks of the insurgents. Most were either shot dead or beheaded.

Though now an Isis affiliate, the insurgents in Mozambique remain a fundamentally local threat.

The unrest has forced hundreds of thousands of people to flee, threatening a major humanitarian crisis, and observers fear the insurgency, if unchecked, could destabilise a swath of southern Africa.

South Africa is reported to be considering a troop deployment, perhaps providing the bulk of a force under the command of the Southern African Development Community that might also include contributions from Zimbabwe and Angola.

Any such operation would be hugely expensive, however, and it is difficult to see how it would be funded, observers said.

Islamic State has warned South Africa any intervention would make it a target for the group.

Any cookies that may not be particularly necessary for the website to function and is used specifically to collect user personal data via analytics, ads, other embedded contents are termed as non-necessary cookies. It is mandatory to procure user consent prior to running these cookies on your website.