Russian opposition leader Alexey Navalny was poisoned with a chemical nerve agent from the Novichok group, the German government said Wednesday, urging the Kremlin to explain itself.

Navalny, who fell ill on a flightfrom the Siberian city of Tomsk to Moscow last month, is being treated at a Berlin hospital.

German government spokesman Steffen Seibert said toxicological tests on samples taken from Navalny had been carried out at a German military laboratory, providing”unequivocal evidence of a chemical nerve agent” from the Novichok group — Soviet-era chemical weapons.

In a statement, Seibert said it was “startling” that “Navalny was the victim of an attack with a chemical nerve agent in Russia.”

“The federal government condemns this attack in the strongest possible terms,” the statement said, adding: “The Russian government is urged to explain itself regarding the incident.”

In a press conference Wednesday, German Chancellor Angela Merkel said the test results proved that Navalny had been the victim of a crime.

“Alexey Navalny was the victim of an attack with a chemical nerve agent of the Novichok group,” Merkel said. “This poison can be detected without a doubt in the samples.”

“This means that Alexey Navalny is definitely the victim of a crime,” she added.”They wanted to silence him and I condemn this in the strongest possible terms, also on behalf of the entire Federal Government.”

“There are very serious questions now which only the Russian government can and must answer,” Merkel said. “The fate of Alexey Navalny has received a lot of attention worldwide.
The world will wait for an answer.

“Novichok was used in a March 2018 attack on former Russian spy Sergei Skripal in the English cathedral city of Salisbury.

Skripal and his daughter, Yulia Skripal, both fell seriously ill after the attack. They survived but Dawn Sturgess, a 44-year-old woman who was accidentally exposed to the military-grade nerve agent, subsequently died.

Kremlin spokesman Dmitry Peskov said Wednesday that the Kremlin had not received any information from Germany that Navalny had been poisoned with Novichok, according to Russian state news agency TASS.

Russia’s Foreign Ministry said it was waiting for a German response to a request from the Russian Prosecutor General regarding Navalny’s treatment and diagnosis, TASS reported.

In the wake of the Skripal case, the British government openly accused the Kremlin of orchestrating the attack and expelled dozens of Russian diplomats from the country; more than 20 of the UK’s allies followed suit. The US and EU also imposed sanctions on Russia.

“It’s outrageous that a chemical weapon was used against Alexey Navalny. We have seen first-hand the deadly consequences of Novichok in the UK,” Johnson said in a tweet. “We will work with international partners to ensure justice is done.”

UK Foreign Secretary Dominic Raab said it was “absolutely unacceptable” that Novichok had again been deployed against a leading Russian opposition figure.

“The Russian government has a clear case to answer,” Raab said. “It must tell the truth about what happened to Mr Navalny. We will work closely with Germany, our allies and international partners to demonstrate that there are consequences for using banned chemical weapons anywhere in the world.

“This is a despicable and cowardly act — once again,” she posted on Twitter. “Perpetrators need to be brought to justice,” she added.

In addition to the EU,Seibert said Merkel would also inform NATO and the Organization for the Prohibition of Chemical Weapons about the results of the investigation.

The flight made an emergency landing in Omsk, and Navalny was transferred to a hospital there, before his wife and supporters pleaded for him to be taken to Germany for treatment.

The anti-corruption blogger was flown to Berlin two days later, and taken to the city’s Charité Hospital.

A hospital spokesperson said Wednesday that Navalny remains in a “serious” condition and that doctors treating him were in close contact with the Kremlin critic’s wife.

“Alexey Navalny is still being treated in an intensive care unit and mechanically ventilated. A longer course of the illness is to be expected,” the statement read. “Long-term consequences of severe poisoning cannot be ruled out.

“The statement added that the critic’s condition was improving and that his symptoms from being poisoned were declining.

Following the German government’s announcement on Wednesday, Leonid Volkov, Navalny’s chief of staff, tweeted out a picture of Russian President Vladimir Putin’s signature. In the accompanying text, Volkov wrote that the act of poisoning Navalny with Novichok was akin to leaving an autograph at the scene of the crime.

The director of Navalny’s Anti-Corruption Foundation, Ivan Zhdanov, also tweeted on Wednesday, writing that Novichok could only be used by “the [Russian] State,” referring to the country’s intelligence institutions. “This is beyond any reasonable doubt,” Zhdanov added.

Andrea Sella, professor of inorganic chemistry at University College London, told CNN: “The identification of the poison as being one of the family of Novichok agents points extremely strongly towards the Russian government being responsible for this outrage.”

“The Russian government has the motivation for it, but also the track record on multiple levels,” Sella said. “It shows both their ruthlessness but also their level of impunity. It is clear that they care little about international opinion and are prepared to act because they know that the consequences are extremely small.” 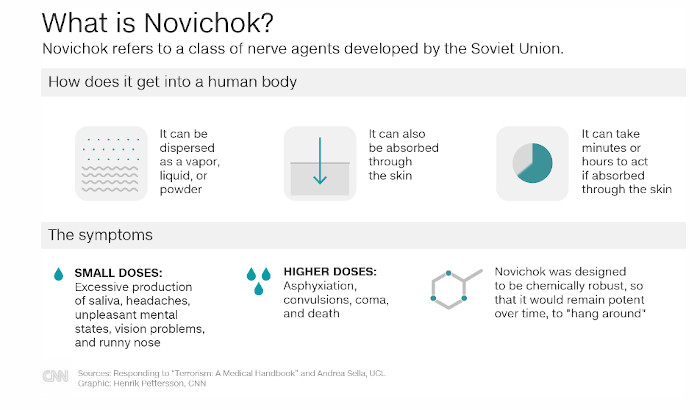 When asked by CNN if Novichok could have been ingested with the tea, Sella said it was “possible,” adding: “It’s not water soluble so perhaps [it’s] tricky. Orally you’d expect it to be fast.

“Sella said another possibility was that poisoning occurred through contact with the skin, as in the Skripal case, where the method ensured a delayed impact.

“But it’s a less efficient means of delivery,” he added. “Oral ingestion might have been possible if the materials were formulated in a way that delays the effects. There are plenty of pharmacological precedents for such a formulation.

“Novichok agents are both lethal and highly unusual, so much so that that very few scientists outside of Russia have any real experience in dealing with them.

Novichok means “newcomer” in Russian. The chemical weapons were first developed in secret by the Soviet Union during the Cold War in the 1980s.

Novichok’s existence remained secret until the mid-1990s, when information regarding production was revealed as part of a deliberate leak by disgruntled Soviet scientist and whistle-blower Vil Mirzayanov. Even today, no country outside of Russia is known to have developed substances in the Novichok group.

Any cookies that may not be particularly necessary for the website to function and is used specifically to collect user personal data via analytics, ads, other embedded contents are termed as non-necessary cookies. It is mandatory to procure user consent prior to running these cookies on your website.